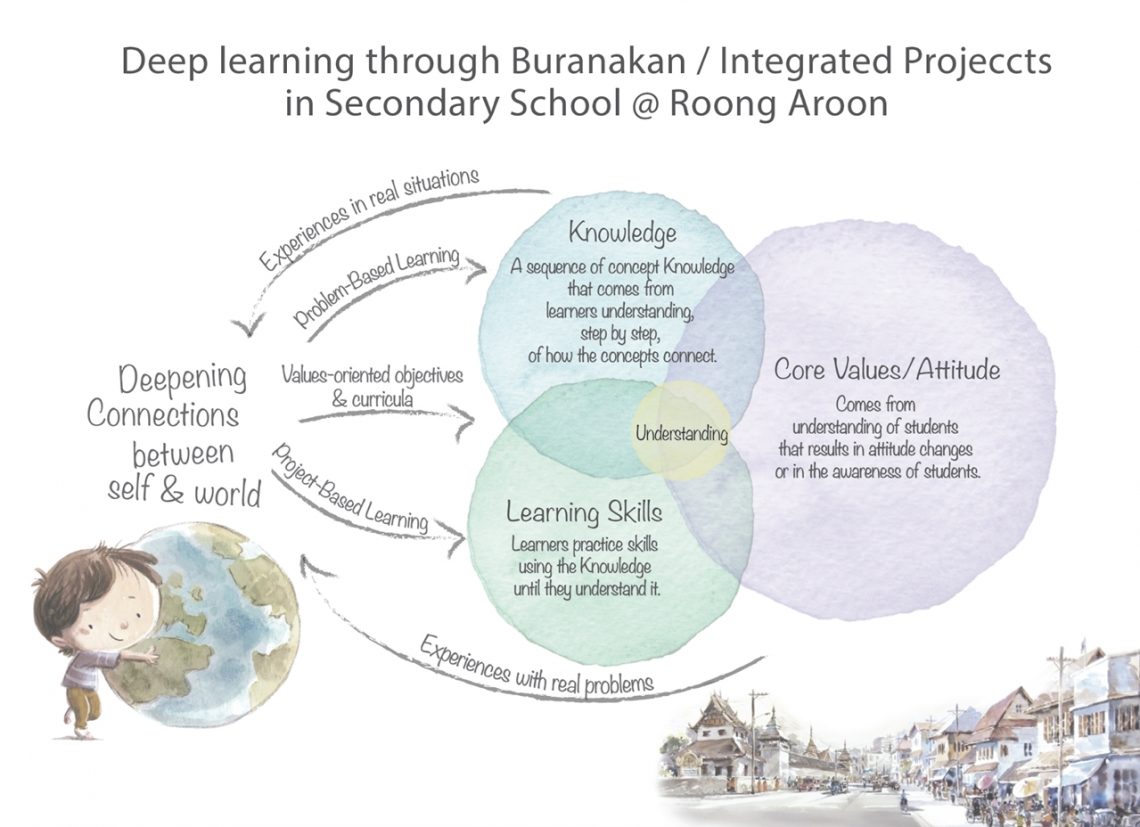 Yod Nam means “dew drops” (literally in Thai), and it is seen as a time for sharing and self discovery. To the extent possible, Yod Nam is organized and coordinated by students in lower secondary at Roong Aroon. It happens in relation to the wider community at the end-of-term after the deeper learning has been integrated through doing, thinking, and developing values, along with growing awareness of the values, as students express and share their learning to others. It is well facilitated when students find their own meaning within the collaborative process.

For the final “Yod Nam” presentation, rather than assigning students to make similar presentations, Teacher Mod asked them to consider what media would be best for sharing their message (videos, infographics, animations, powerpoints, etc.) and with whom they would share their discoveries or creations. Besides parents, who else in the larger society would benefit from their final projects?

Each student, their unique personality, styles, strengths and how they worked alone or together in pairs or small groups, were given freedom for developing in their own ways while preparing for the Grade 9 “Yod Nam” project. One video was required by all teams to share with parents. Each team member reflected on their goals, purpose of the project, their research process, decisions made, and what they had learned from the process.  (In a non-COVID pandemic year, students would present directly to parents, but this year parents were not allowed on campus, one of many rules set in place for health and safety.)

The table below gives a summary of students’ final projects and what they said about their overall learning from creating the projects while presenting for Yod Nam. Some students focused on self-reflections about skills developed while others gave more attention to knowledge. All showed awakening values, based in knowledge and facts that they had researched by themselves, about the importance of caring for the ocean’s resources in ways that made sense to them. 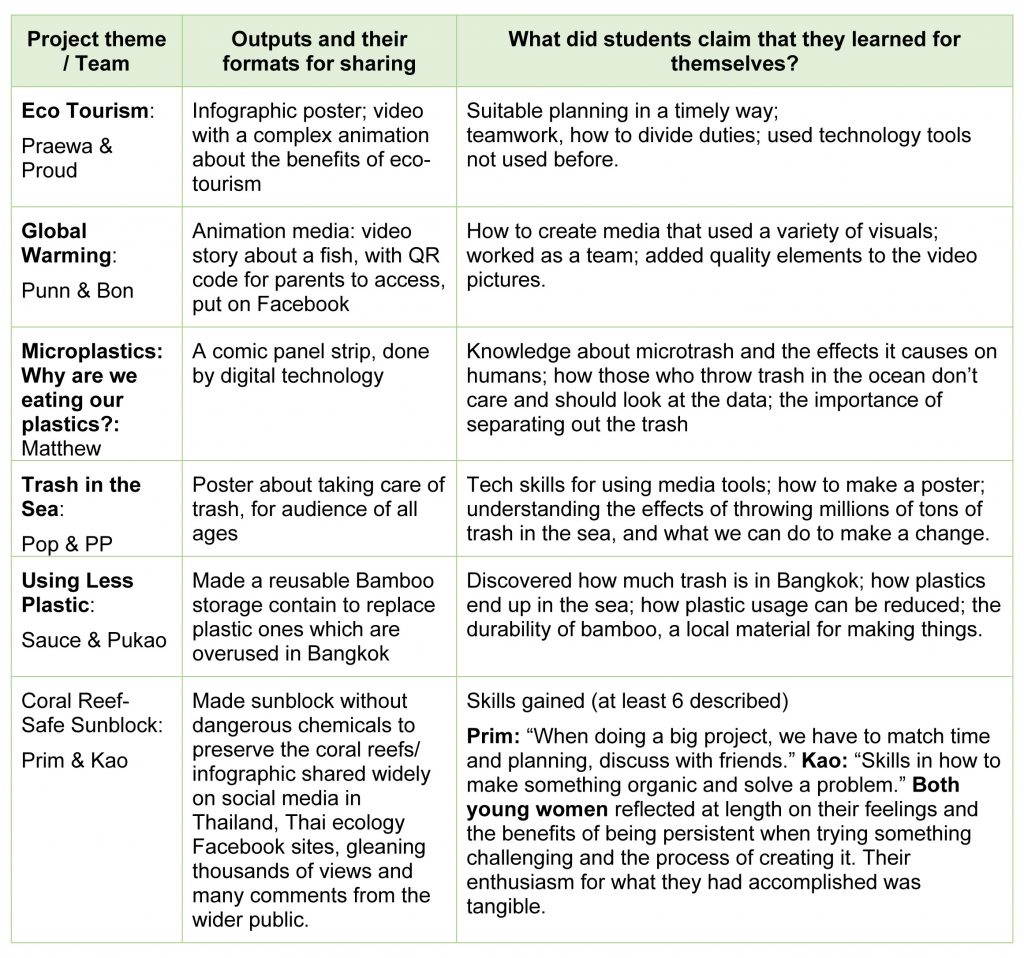 When reviewing projects, meta-cognition must be considered as essential: How did students describe their own learning outcomes? They described an assortment of skills, knowledge, and the deeper value that they had gained–being sure to cover each; though, with this particular group of Grade 9 students, greater emphasis went to skills.

If students do activities by following steps or making choices for the sake of the activity alone, its value is viewed as minimal at Roong Aroon. For deeper learning, students need to see how their learning connects with and contributes to the wider community. This connection was noted in how students described their projects overall as a potential contribution to reducing specific aspects of ocean pollutants based on their own research of the facts of their local ecosystems of Thailand.

Notably, there was a tendency for students to research similar issues, as they had started with similar tasks early in the term. Still, how they had done their own explorations and research, how they self-assessed their own learning was distinct, linked with their personal interests as well as the strengths of each student, while the projects allowed for working on their weaker areas too.

Ongoing practice presentations and feedback had assisted the students in reaching an end point that they could be proud of, contributing each in their own ways to the wider community. It was a form of raising public awareness that began by raising their own awareness and knowledge first, then spiraled outward as students developed their communication skills for gradually sharing and discussing what they were learning with each other and with the teacher, then eventually with a wider public. They discovered deeply and for themselves how nature usually renews itself, but how negative human activities around Thailand had been drastically affecting the seas, creating an imbalance that could no longer renew itself. The learning process had stimulated them to want to take action and share their findings with others. The value they had learned was not merely a belief but it was a concerned attitude supported by knowledge gained through in-depth inquiries. They had been guided to go beyond superficial knowledge, and to keep looking for how all the pieces of the the ecological puzzle of the seas and human life were fitting together.

Together, their knowledge, skills, and values were forming an  , along with complex communicative competencies of caring for the earth and its sea system while acknowledging and coming to a deeper appreciation of how humans were impacting the natural system. Knowledge, skills, and value were blending together to become part of the students’ deeper learning and awareness of themselves in connection with their world.